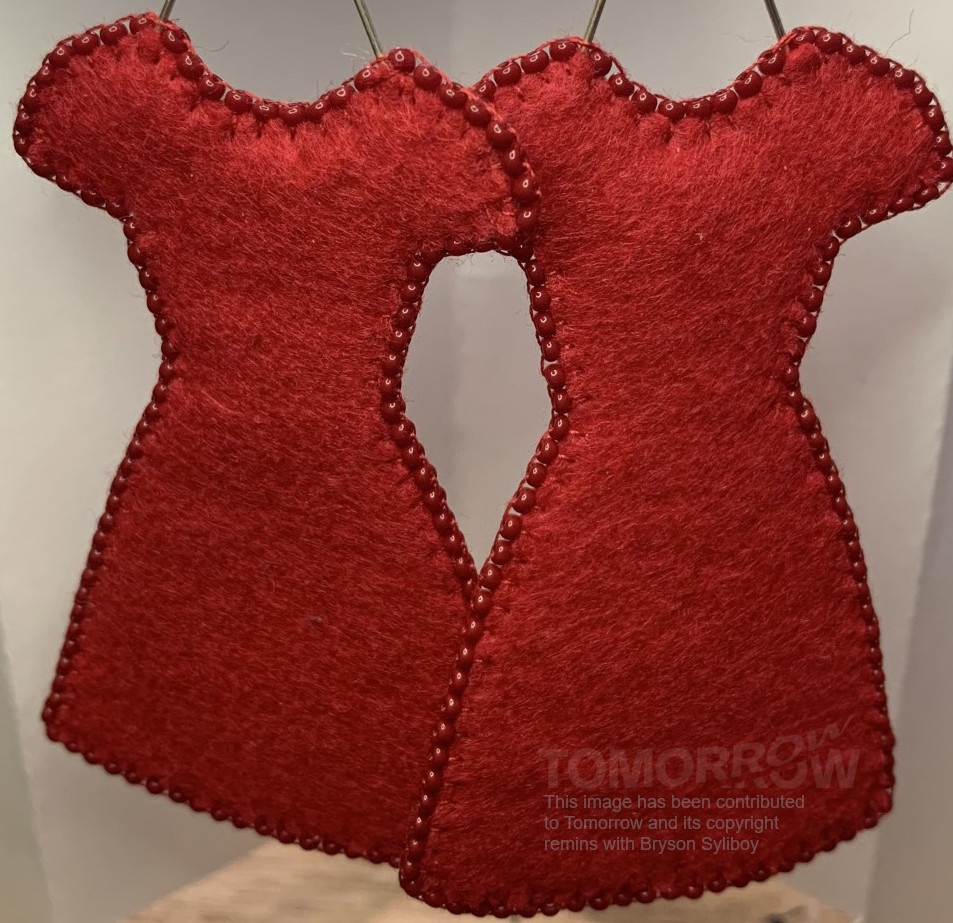 The red dress is a symbol to remember and honour the lives of Missing and Murdered Indigenous Women and Girls. These earrings were made by Bryson Syliboy. Photo courtesy Bryson Syliboy

One year on from the National Inquiry into Missing and Murdered Indigenous Women and Girls (MMIWG),1  the world has changed but too much of Canadian journalism has not.

Even as news reports offered extensive coverage on the publication of the conclusions and recommendations, commentary focused on one word: genocide.

The response by major Canadian news outlets remains a source of shame and embarrassment, but it was not a surprise.

“The report on missing and murdered Indigenous women was searing and important, marred only by its inaccurate genocide charge” (Globe and Mail, June 4, 2019)

My personal belief is journalism means reporting, not commentary. A particular problem last year was editorials and commentaries. They weren’t needed and were at the expense of critical reporting of the inquiry’s findings.

“Critical” doesn’t mean criticising the inquiry’s very existence. There are countless questions we could have asked before about racism and its consequences within Canadian borders. And there are endless questions we should ask about how the “calls for justice” could be implemented, why they weren’t decades earlier and how they’ve been ignored in the past 12 months.

There were demands for action worthy of journalism’s attention in the hundreds of pages in the final report, such as safe and affordable transit (4.8) or an annual liveable income (4.5).

Both of those are now being discussed widely because of the coronavirus pandemic, i.e. only once it affected the majority, not a minority. That is a hallmark of racism, that we care about a problem only within the context of the white majority.

One passage that particularly stuck out for me last year was this, on page 10 of the executive summary of the final report:

In describing the relationships that were important to understanding the violence experienced in their own life or the life of their missing or murdered loved one, families and survivors drew attention to specific moments in those relationships they felt were especially important to understanding the circumstances, causes, impacts, or details of that violence – what we have characterized as “encounters.”

This concept of “encounters” refers to powerful moments that occur within relationships that families and survivors showed to be significant. These encounters represent a time and space through which the vision, values, and principles that shape families, communities, and individual lives are created. We see these as transformational moments, too; in other words, these encounters can lead the way to harm or to healing, depending on the context. To engage in encounters like these represents an important responsibility and an opportunity to shape the terms of a relationship in a good way.

That sounds like good journalism to me: we interview people about their encounters, good or bad, to report a truth based on what we are told and what is known.

Whether because of racism or their comfort with judging certain peoples, groups or nations as less newsworthy, columnists and editorial boards last year failed to recognise that the inquiry report met higher standards of journalism than most papers hold daily.

My profession should always aspire to be as thorough as the inquiry. With more than 2,380 people taking part, that is more than read many of our stories now. Even fewer will read or engage with Canadian news organisations after last year’s failures. It was a missed opportunity that would take years to rebuild from, if it was possible at all..

The very idea that some columnists and editorial voices carried more weight than 2,380 is the definition of privilege, and a superiority complex which underlies the hundreds of years that preceded the MMIWG report.

I was trained in journalism in the UK, outwith the obsessive concept of “objectivity” in North America. Walking Eagle News was entirely correct last year when, even in satire, it pointed out Canadian news outlets would look for pro-cancer voices.2

We have accepted there is no need now to offer the “other side” of climate change. Why is it still necessary for murder? Why does genocide require only one side when elsewhere in the world but not at home?

Then as now, I accept the findings of the inquiry, and the conclusion of genocide. I appreciate whether I do or don’t accept it doesn’t matter to the truth of the experiences shared with the inquiry or its conclusions. But as a reporter, particularly after the response from privileged white voices in Canadian media last year, I feel it remains important to sit apart from their positions.

Reporters, I believe, must comfort the afflicted and afflict the complacent. That means we must report on loss, murder, racism, genocide AND what is being done in response to it, or not.

It is complacency that has ensured the genocide of Indigenous peoples within Canada continues long after the language of politicians changed to ones of apologies, even if their actions didn’t match up.

And commentators or editorial boards who argued against the word genocide seemingly decided their creed is to “comfort the comfortable, afflict the afflicted”.

That approach also fails principles of accuracy, justice must be seen to be done, promote responsible debate and mediation, and more.

As the pandemic has pushed some news organisations to close and others to even further cuts to their journalism, the same voices who refuted the word “genocide” last year have survived. Columnists who spout hate always do.

I absolutely want more resources for reporting, but not if it’s going to break what should be basic pillars of our work. If we can’t recognise the reporting inherent in the MMIWG inquiry, then we have no business doing journalism ourselves.

Meeting the demands for change of the TRC and MMIWG inquiry requires much better action than my profession has shown. That was true in 2019 and remains true 12 months on.

Journalism must survive the pandemic. But it should change fundamentally from the profession that allowed or encouraged racism for more than a century against Indigenous nations within Canadian borders.

Canadian journalism has to do better. We have to report the ways to make lives better, and report on those who stand in the way.